In 1829 a grant of 5000 acres was awarded to British Army Colonel, Peter Latour.  It is said that land grants such as this was common as a way of rewarding British Army hierarchy for their willingness to command the settlement of the British colonies.

In 1832 Colonel Latour sold portions of his land to various people including Mr. David Dring.  A portion of David Dring’s land was to become subdivided into smaller holdings, one of which was a 200 acre lot sold to Mr. Sidney Chester in October 1883.  Mr. Chester built 2 houses on his 200 acre holding.  The first one was built on West Swan road and was named “Goodwood”.  The second house, also called “Goodwood”, was built sometime later on a hill of sand situated 250 metres west of the new restaurant and winery.

Sidney Chester arrived in the Perth colony from England with his father Joseph and mother Betsy in 1849.  Chester was 4 years of age. After leaving school he worked for Barker and Gull Merchants for 26 years, after which he became a partner.  Shortly after, he commenced his own business which was situated next to the Governor Broome hotel in Hay Street, Perth.  He retired 20 years later to live quietly on the Swan collectively in the houses mentioned above.  The second house still stands as a typical example of an 1800’s residence, truly a Gentleman’s residence.

The “Chesters” restaurant building now known as The Abbey, commenced life in approximately 1890 as a fruit drying shed. It was used to dry grapes and figs that were grown on the property.  The bush pole columns still stand as evidence of the day.  The drying shed was doubled in size and converted to an 18 stall stable complex which functioned as such up until about 1998.  During its heyday, the “Rangeview Riding Academy” operated from within the stable.  In 2002, the current owner stripped the stalls and the external wall cladding which had seriously deteriorated, and introduced a new concrete floor, new external walls and a state of the art restaurant fit out.  All of the internal restaurant tables, cashier counter and cupboards, including the manager’s desk and external wall lining boards are made from the stable stall wall boards.  The building reflects some history of the area and building methods of past times.

We aim to provide great food within a relaxed and comfortable environment. 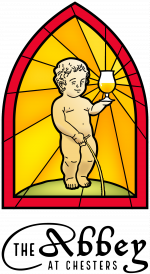